In yesterday’s Daily, we told you about a safe way to play the growing trend in solar power.

If you need a refresher, here it is…

SunPower Corporation estimates that the new law will increase California’s solar market by at least 50% in 2020.

We aren’t fans of the regulation. It’s expected to increase the cost of a new house by $10,000. Plus, it will create massive distortions in the state’s electricity market.

That isn’t good news for Golden State homeowners. But if you’re an investor in solar power, there’s plenty of upside in this trend.

For instance, you could buy the Guggenheim Solar ETF (TAN). TAN holds a broad basket of solar companies. The fund is up 18% since we first mentioned it in October 2017. And I expect prices to surge higher as the new regulation kicks in.

But there’s another way to play this trend for potentially much higher gains. I’ll show you in a moment.

Solar Is Growing—But It Won’t Be Easy

Solar is also the fastest-growing energy source in America. But solar power has some drawbacks…

A major (and obvious) one is that solar panels only produce electricity during the day. And most of that generation happens around high noon, when the sun shines brightest.

So at night—when everyone is at home using their lights, cooking dinner on the stove, and watching Netflix—electric power needs to come from elsewhere.

That power comes from natural gas and coal-fired plants, which operate day and night.

Here’s the thing… Running solar, natural gas, and coal-fired plants during the day can overload a power grid.

Solar panels don’t store energy. Any excess energy they produce goes back into the electrical grid.

But remember, solar plants aren’t the only ones operating during the day. Coal and natural gas plants are producing electricity, too.

You can’t just turn off coal and natural gas plants like a light switch… The shutdown and startup times are costly and lengthy.

All that energy—from solar, coal, and natural gas plants—puts tremendous strain on the power grid. This overload can damage generators and motors connected to the grid.

Last year, California produced so much solar power that on some days, the state had to pay Arizona to take some of the excess energy off its grid.

Around noon, it costs about $15 per megawatt hour because there’s plenty of power and less demand. It jumps to $60 at 7 p.m., when power supply is less and demand is higher.

Before solar can become widespread, these problems need to be solved.

One way to solve this problem is to store excess solar energy in batteries. But you can’t just use any type of battery. You need specialized lithium-ion batteries. Power plants like them because they are rechargeable.

For instance, San Diego Gas & Electric built a large lithium-ion battery that holds enough electricity to power 20,000 homes for up to four hours. Utilities in Australia and Japan have also built large batteries.

Analysts project the lithium-ion battery market to grow 400% over the next seven years. And about a quarter of that growth is going into energy storage… aka batteries.

But here’s the thing… The supply of lithium and cobalt (the two main metals used in lithium-ion batteries) are mostly fixed. Plus, it can take decades to bring a new lithium or cobalt mine online.

The increased demand for these metals—combined with a fixed supply—has caused prices to soar in recent years. 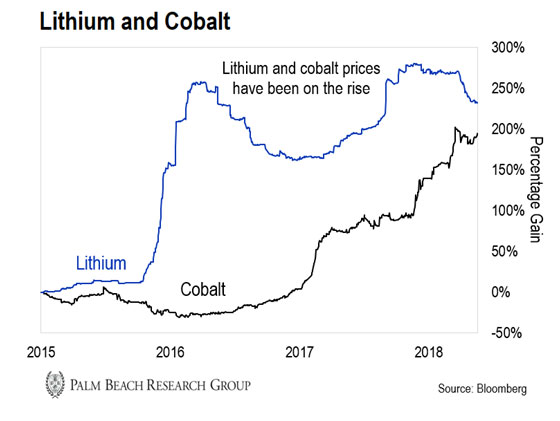 I don’t expect that this will let up anytime soon. Demand will continue to grow while miners take time to open new mines.

If you want an easy, one-click way to play the boom in lithium prices, consider the Global X Lithium & Battery Tech ETF (LIT).

It holds a basket of lithium producers and battery manufacturers. LIT will be a good way to play the growth of lithium-ion battery tech.

Cobalt is much rarer than lithium and could be an even more profitable play.

The metal is mostly found as a byproduct of copper and nickel mining. Mines that focus exclusively on cobalt generally aren’t that profitable… so they don’t get built out.

And over half the world’s cobalt supply comes from the Democratic Republic of the Congo, one of the world’s most politically unstable countries. If another war breaks out in the country, it could jeopardize that supply. And prices would really soar.

Unlike lithium, there’s no ETF for cobalt. If you want to invest in this metal, you’ll need to buy small junior mining companies.

This is a risky industry for novices to wade through. So you’ll need an expert to help you find cobalt mines.

And we can’t think of anyone better to help you find highly profitable cobalt mining companies than my colleague Dave Forest, editor of International Speculator.

Dave is a geologist. He’s done everything in the mining business… from working in the field to running the show as a mining executive.

Dave has just published a new special report called “The Cobalt Blueprint: How to Earn 86,900% Gains From America’s Next ‘Super Metal.’”

If you’re interested in making potential life-changing gains in commodities, you can learn more about his service here.

David tells us that he’s making this report available until June 15, so you must act soon…