I just found the world’s worst investment—and you probably own it.

As Palm Beach Letter editor Teeka Tiwari told me in a recent interview, “anyone holding bonds is about to get annihilated. Especially those holding long-term bonds.”

Few bonds are longer-term than Argentina’s century bonds. Last year, the country issued bonds that mature in 2117. And investors scooped them up because of the high yield… Right now, they’re yielding 7.7%.

This may sound like a good bit of income, but these bonds are getting crushed. Just look at this chart of the bond’s price over the past year. 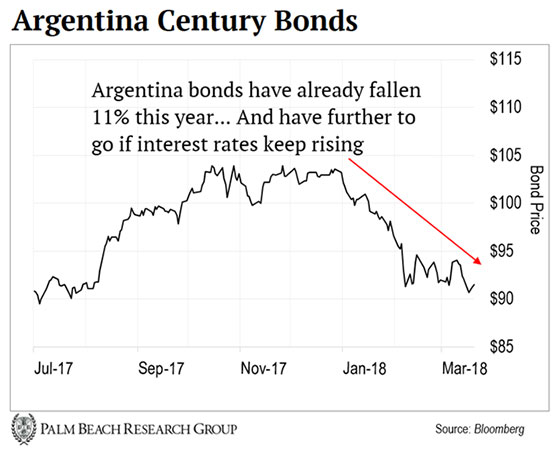 Now you might think, “I’d never buy bonds from Argentina.”

But for income-starved investors, the 7.7% yield looks pretty juicy. It can be tough to pass up on something like that right now. And it looks even more appealing because these bonds are issued in dollars. So you have no foreign exchange risk.

You see, savings accounts today yield about 1%. CDs might give you a fraction of a percentage more. 10-year Treasuries only give you 2.8%.

That’s why investors are turning to longer-term Treasuries. And while the 30-year is only yielding 3.1%… it’s considered the “safest yield” today.

As you’ll see, this is a huge mistake.

Investors typically buy bonds for their safety. Bond prices fluctuate less than stocks. And when the bond matures, you know how much it’ll be worth.

They also give you income. Most bonds give you semi-annual interest payments. So you get something for your investment. And for those living off their savings, this is very important.

But bonds can lose money. The first, most obvious way is if the bond defaults—you may never see the return of capital if that happens.

While that probably won’t happen anytime soon with U.S. Treasuries, there are two other ways they can lose value. You need to watch out for both today…

No. 1: Inflation “The Silent Killer”

Inflation is the silent killer for bond investors. It doesn’t make the price of your bonds go down. But it certainly does reduce the value of the money you get back.

The Federal Reserve has a target rate of inflation of 2%. They want our dollars to inflate 2% a year. Said another way, they want the value of our bonds to go down 2% a year.

But a target is hard to set. And I don’t trust the Fed to get it right. Looking at history, since 1914, the purchasing power of the dollar has gone down an average of 3.2% per year.

At today’s current yield of 3.1%, you’re essentially losing 0.1% of real value every year.

Wall Street calls this “duration risk.” It’s the fact that as interest rates rise, the prices of your bonds go down.

If you don’t want to hold that 30-year Treasury for the entire time, you could have to sell it at a loss.

And the longer out a bond matures, the more the price fluctuates.

As Teeka told me, some long-duration bond funds have already lost 9% of their value. That could only be the beginning…

And interest rates still have a lot higher to go… They’d have to double just to get back to the long-term average.

If the 30-year goes back to its historical average of 6.9%, holders can expect the prices of their bonds to go down over 40%.

How to Avoid Income Extermination

They will be hit the hardest in the coming income extermination. I wouldn’t be surprised if some of those funds fall over 50%.

I know many of you are desperate to get income from your investments. But don’t reach for yield in long-term bonds. You’ll get burned.

Paid-up Palm Beach Letter subscribers can read the latest issue to see which safe, high-yielding investments they can make to collect income while avoiding the income extermination.

Everyone else, stick to short-term bonds. You won’t get as much in interest right now. But you’ll be in a better position in a couple years to reap the benefits of higher interest rates.