Take a look at the two charts below…

Most investors would probably panic and sell both companies after seeing massive drops like these.

They also would be making the biggest investment mistake of their lives.

Over a three-year period, shares plummeted from a split-adjusted $5.15 to 93 cents. 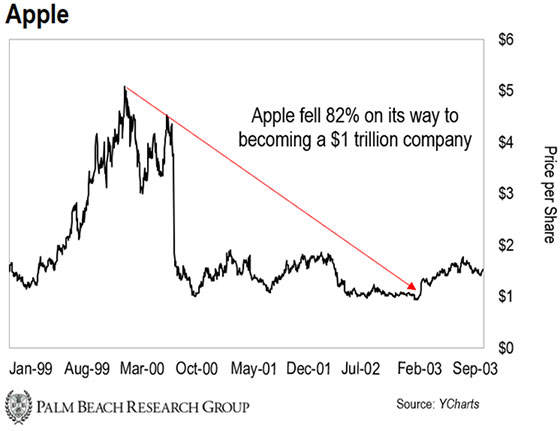 (Much like bitcoin today, people were calling for the death of Apple. The “Apple Death Knell Counter” counts at least 71 premature obituaries.)

On its way to becoming the second-largest publicly traded company in the world, the online retailer took a 96% nosedive during the 2000 tech wreck. 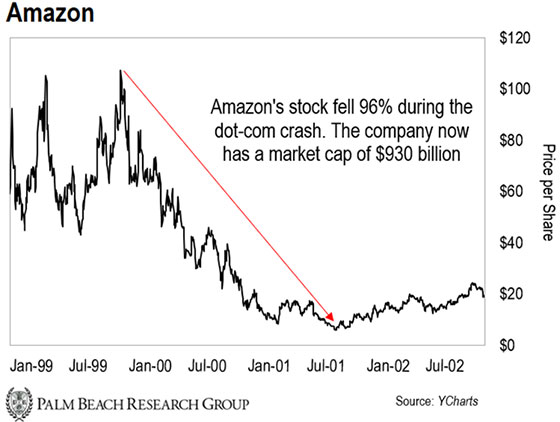 Young technology companies see these kinds of falls all the time. And that’s exactly what’s happening in the cryptocurrency market.

Today, I’m going to tell you what’s going on in the crypto market… and more importantly, why you should ride out the volatility.

What’s Behind the Beatdown

Since Monday, the crypto market is down 6%. Much of that volatility was due to the selling of ether, the second-largest crypto behind bitcoin.

Just like IPOs, blockchain projects use ICOs to raise funds.

This year, blockchain start-ups have raised $17.9 billion from ICOs. That’s already more than all of last year combined.

That’s a great sign that the overall crypto market is growing. But it’s a short-term problem for Ethereum.

Palm Beach Confidential editor Teeka Tiwari—who just left a meeting of crypto insiders in Switzerland for another in Moscow—explained the problem during an update to his subscribers on Tuesday:

I had a very late-night meeting with the head of a Swiss family office that runs an enormous amount of money here in Switzerland.

We’re finding out what’s happening right now; so the reason we’re seeing a big sell-off—especially in Ethereum—is this year, we’ve seen companies raise more money in initial coin offerings than all of last year. And the primary funding currency that they’ve used to raise that money has been Ethereum.

As ether prices have started to come in, the folks in these ICOs have started to panic. This is their funding; if you raised money when ether was at $800, then it went to $400, and now it’s at $260… the panic starts to set in. Because you originally raised $30 million, then it was worth $15 million, and now it’s worth $7.5 million. So these guys are seeing their runways just evaporate.

As Teeka noted, these projects thought they had raised enough funds to last them for the next two years… At the current market price, those funds will last less than a year. That’s why they’re panic-selling.

We’ve seen similar situations in the stock market… like Apple and Amazon in 2000.

We don’t have a crystal ball… so we can’t say when the panic-selling will end.

But we know that quality companies will eventually rebound and go even higher—just like Apple and Amazon did after the dot-com bust.

What to Do Now

No one knows how long this current crypto downturn will last…

Over the past two-and-a-half years, the PBC crypto portfolio has seen five drawdowns of around 85%. However, the overall portfolio is up 828%.

This is just another bout of volatility.

And there are a number of tailwinds behind cryptos … It just hasn’t been priced into the market yet.

That’s why we recommend you take small position sizes with cryptocurrencies. As Teeka advised his subscribers:

If you use big position sizes, you can’t sit through this type of volatility. You panic, you sell, and you’re up all night worrying about what the market is doing. This is something that you should not be worrying about. You put your positions on, you leave them on, and you let the market do what it’s going to do. Neither you nor I can control what the market does on a day-to-day basis.

That’s what smart investors who held onto Amazon and Apple did through their crashes. And that’s what crypto investors should do today.