These yields don’t show up on Yahoo! Finance. They don’t even appear on the $25,000-plus-per-year Bloomberg Terminal service I, and many professional traders, use.

In fact, they show TDG paying a 0% yield.

Few investors realize this, but there are a lot of hidden gems like TDG out there.

The market hides them by saying they pay no (or small) dividends.

Yet they’re still some of the best dividend-paying stocks out there.

At the Daily, we know our readers like income-generating investments, especially if you’re retired or near retirement. That extra income can cover bills and unexpected expenses, or even pay for a vacation.

Today, I’ll show you how to find these hidden gems. But first…

It’s hard to generate income from the markets today… especially when traditional income investments like the 10-year U.S. Treasury only yield a paltry 2.8%.

Stocks yields are near historical lows as well. As you can tell from the chart below, stock yields were only lower from 1996–2004. 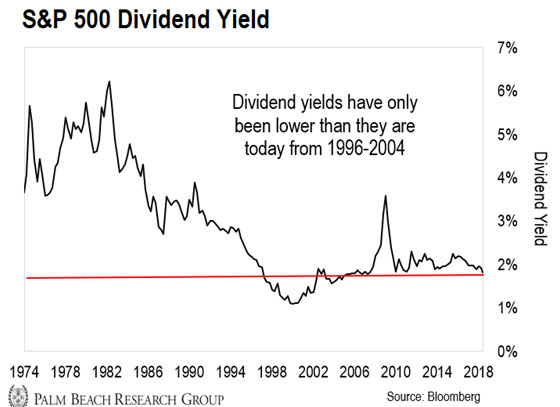 So the hunt for income is real…

When hedge funds or wealth managers look for dividend-paying stocks to add to their portfolios, they’ll often do a stock screen.

Of course, the first criterion is that the stock pays a dividend. After that, they might filter out unprofitable companies or look for companies increasing their dividends.

Then, they’ll take that list and look for the stocks they think will perform the best.

However, no matter how sophisticated the screen, a company like TransDigm won’t appear on their lists.

That’s because TransDigm’s yield is hidden. You see, it pays a “special dividend.” (It paid out these special cash dividends in June 2014, October 2016, and September 2017.)

Special dividends are non-recurring distributions (usually in the form of cash) that companies make to shareholders. Companies pay them for several reasons.

In other cases, companies may want to avoid the financial pressure of paying regular dividends. This is especially true of companies with cyclical or uneven cashflows.

As I mentioned above, special dividend payers usually don’t show up on the screens used by most stock pickers. If they do, they show smaller yields than they actually have.

So if Wall Street can’t find these hidden gems, most Main Street investors won’t, either.

That’s why you turn to the Daily.

Special dividends are generally paid in the form of cash payouts. And they’re often larger than regular dividends.

Even better, some companies pay special dividends on top of their regular dividends. So their yields are much higher than they’d appear on a stock screen.

One example is the CME Group (CME)—the parent company of the Chicago Mercantile Exchange.

Below is a list of the 2018 yields for the five biggest companies that pay out special dividends. Always remember to do your homework before buying any company.

Good luck on your hunt for yield.