WISCONSIN RAPIDS – I’m back on the road…

Right now, I’m in the sleepy central Wisconsin town of Wisconsin Rapids. And as I drove down the main drag, my jaw dropped when I saw this sign… 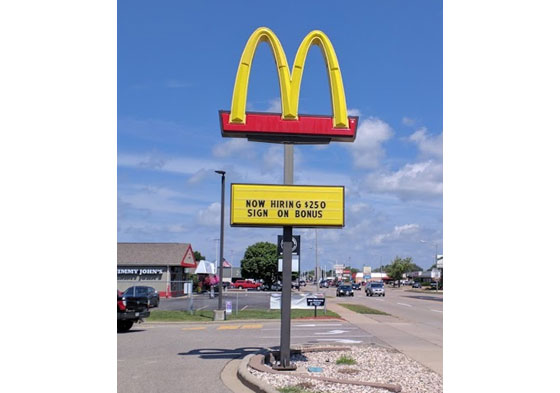 The job market here is apparently so hot that McDonald’s is offering a $250 bonus to new workers. And it’s not alone.

In nearby Stevens Point, the UPS service center can’t find enough part-time package handlers. It’s a 20-hour-per-week position… UPS is also offering a $100 weekly bonus—averaging out to a $5 per hour bonus.

If that’s not enough, most new hires are eligible for tuition reimbursement… up to $5,250 a year. That’s almost enough to be a full-time student at the nearby college.

This isn’t just a Wisconsin thing…

National Construction Rentals is offering a $1,500 bonus to new fence installers—$500 paid on the 18th day of employment.

Registered nurses in the Tampa Bay area can get a $2,400 sign-on bonus if they work certain shifts.

This shouldn’t come as a surprise to regular readers…

During my Rust Belt Tour last year, I showed you the economy was getting better in most parts of the country…

I wanted to see how well this trend was holding up. So I set out across the country again this summer to see how things are going on Main Street—not Wall Street.

People Are Getting Paid More

According to the Bureau of Labor Statistics (BLS), average worker wages are growing faster now than any time in the past eight years. 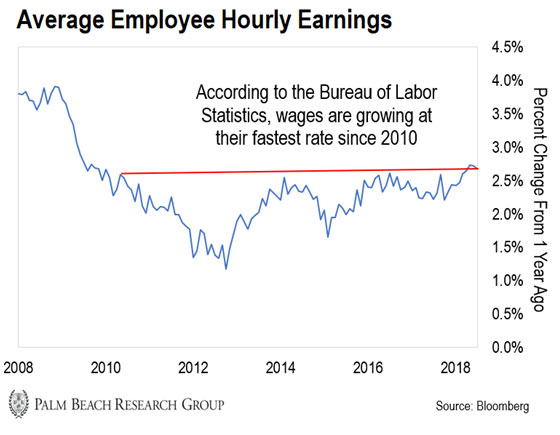 More people are working, too.

According to the BLS, the U.S. has 2.5 million more full-time workers than it did last year—a 1.5% increase.

More workers are earning more money and pumping it into the economy. And we’re seeing new evidence of this spending…

On August 13, the National Retail Federation raised its expectations for sales by 4.5% from last year.

Here’s what CEO Matthew Shay had to say:

Higher wages, gains in disposable income, a strong job market and record-high household net worth have all set the stage for very robust growth in the nation’s consumer-driven economy.

That’s what I’ve been telling you since my first Rust Belt Tour last year: The U.S. consumer is strong. And despite what you hear, the economy is very strong, too.

But it’s not just stores that are getting a boost…

According to the U.S. Department of Commerce, second-quarter restaurant sales surged 25% higher than during the same time last year. That’s the biggest gain in the 26 years the department has tracked restaurant sales.

Most notable is Walmart. Last week, the giant retailer reported 4.5% sales growth for the past quarter. Walmart has $500 billion in annual sales… so that’s a huge gain (and double what experts predicted).

Walmart’s stock rose 10% at the open of that day—which was its biggest one-day move since 2008.

This bodes well for all of retail. And there’s a simple way to play this trend.

How to Play the Booming Economy

In September 2017, I told readers to ignore the gloom-and-doom about a retail apocalypse… In fact, I wrote that retail was headed for a turnaround.

I brought the SPDR S&P Retail ETF (XRT) to readers’ attention. Since then, it’s up over 25%.

Institutions are starting to catch on, too…

Palm Beach Trader editor Jason Bodner is our Wall Street insider. Each morning, his proprietary system pulls more than 120 data points on over 4,000 U.S. stocks to find which companies big institutions are buying.

His system started signaling big buying in retail in June 2018… and he predicted the sector would gain momentum (see our June 22 “Chart Watch”).

Jason was right… A recent Reuters article reported that multibillion-dollar hedge funds (such as Third Point Management and Greenlight Capital) are pouring into retail stocks.

The “smart money” is following us into the retail trade and pushing the sector up. They see what we see—a strong consumer and economy.

If you own XRT, continue to hold.

If you don’t own XRT, don’t worry… I’ll be touring the country looking for more money-making opportunities you won’t find in the mainstream press.