Last week, yields on the 10-year Treasury reached 2.995%… And as usual, the mainstream media panicked.

The press is worried that rising interest rates will sink the current bull market. You see, the 10-year U.S. Treasury note is the benchmark for interest rates. It’s an important number in global finance.

When the 10-year rate rises, other loan rates follow. That means you pay more interest on your mortgages, student loans, credit cards, and car loans.

In April, yields on the 10-year note rose to nearly 3% before pulling back a bit. That may not seem like much. But it’s the highest level since January 2014.

At the Daily, we’ve been warning readers for months that rising interest rates will lead to Income Extermination.

Headlines about rising rates are scaring investors out of stocks, too. The market fell 2.7% just two days after the 10-year rate almost touched 3%.

But as regular readers know, we look past the headlines to find the real money-making opportunities. Today, I’ll tell you which companies will beat Income Extermination. But first, let me tell you what you should avoid…

The Fed has signaled that it will raise rates another two or three times this year. And projections have more raises next year.

This will put pressure on bond prices… specifically, long-dated bonds. (Or as Wall Street calls them, “long duration bonds.”)

Retirees are in the greatest danger. According to the U.S. Census Bureau, those age 65 and older own the highest percentage of U.S. government and corporate debt.

If you own bonds—especially those with long durations—you should consider ridding your portfolio of them.

As you can see in the chart below, the “safe” iShares 20+ Year Treasury Bond ETF (TLT) is down 6% this year. 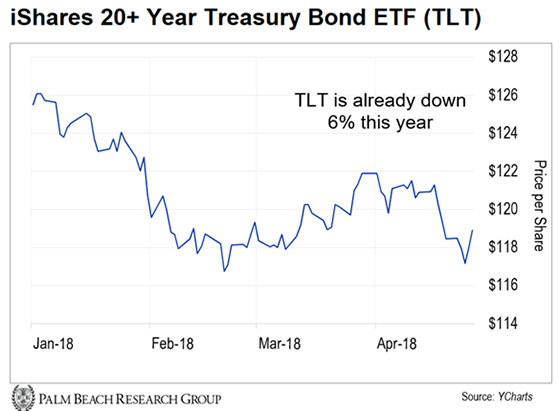 However, the story is different for certain stocks…

These Companies Will Beat Income Extermination

History shows that when interest rates are rising, it’s a good time to hold stocks.

The chart below shows the Federal Reserve Funds Rate compared to the S&P 500. The funds rate is the rate at which banks lend to other banks on an overnight basis. 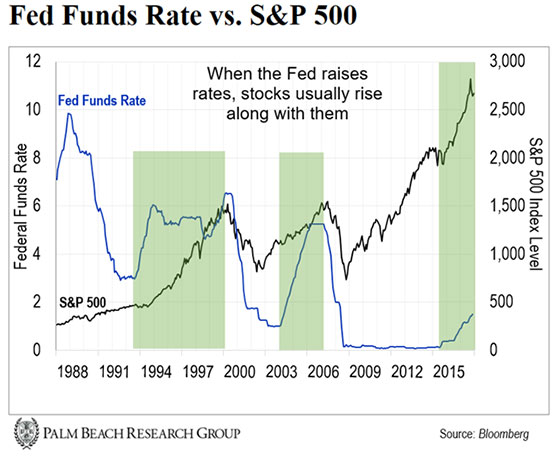 As you can see, when the funds rate goes up, the S&P 500 usually moves higher.

Of course, rising rates will increase borrowing costs. But for high-quality companies, an increase from 2.9% to 3% won’t matter much.

Even if a company has $100 million in debt… the extra cost to service that debt would only be $100,000 per year. For quality companies, that’s just a rounding error.

Rising rates hurt heavily indebted companies. And it will get only get worse in the next stage.

But market leaders like Amazon, Apple, Facebook, Google, and Microsoft have little or no debt. So they don’t have to worry about higher rates.

If you’re looking for companies to beat Income Extermination, consider the market leaders.

P.S. The next stage of Income Extermination will hit marginally profitable companies with lots of debt… especially if they must roll over their debt in the next year or two. If you’re interested in a list of companies to avoid, let us know right here. If there’s enough interest, I’ll put the PBRG team on the case.