The market has spoken… And right now, China is losing the trade war. 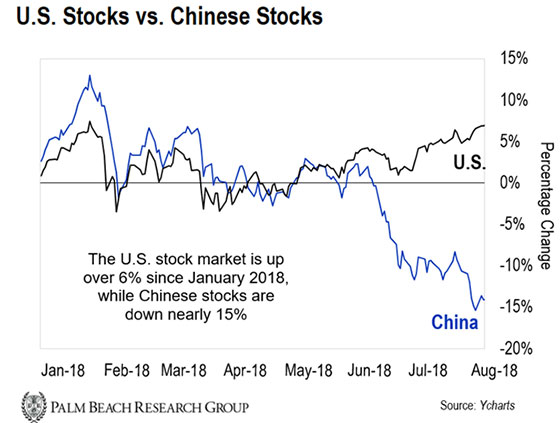 As you can see in the chart above, the U.S. stock market is up over 6% since January 2018… while the Chinese market is down nearly 15%.

Regular readers know we’re not fans of tariffs. And we don’t like to get bogged down in geopolitical spats. But we play the hand we’re dealt…

Meanwhile, Chinese stocks are down. When I see a sector beaten down this much, my contrarian side comes out.

I like to buy stocks when they’re on sale—and Chinese stocks are 20% cheaper than they were at the end of January.

As we’ve written repeatedly, we think the media has sensationalized the trade war… and that it will wind down later this year. (See my July 10 Daily, “Trump’s Trade War Master Plan.”) When it does, the Chinese and U.S. stock markets will rally.

But Chinese stocks are trading at half the cost of their U.S. counterparts. So they could see an even larger rally when tensions cool off.

Germany-based asset manager Star Capital is one of the best resources for world stock valuations. According to its rankings, China is the second-cheapest market in the world (behind only Russia; the U.S. is the 34th most expensive out of 40 nations in the index).

Metrics bear that out…

China’s market is trading at a P/B ratio of 0.9. That means you can buy it for less than the cost of its assets. That’s a value investor’s dream.

By comparison, U.S. stocks trade at P/B ratio of 3.3. Based on this measure, Chinese stocks are trading at about 25% of the cost of U.S. stocks.

By this measure, Chinese stocks are trading at nearly one-third the cost of U.S. stocks.

No matter how you slice it, Chinese companies are cheaper. But the price of Chinese stocks has nothing to do with performance.

Both the Chinese and U.S. stock markets grew profits by about 18% over the past two years.

The main reason Chinese stocks are trading so cheaply is the trade war. But if it winds down, we can expect Chinese stocks to return to their average valuations (or higher).

If valuations do return to their 10-year average, that implies the Chinese market will rise 65%.

So what’s the best way to play this?

To find out the best way to invest in China, I turned to Brendan Ahern, the chief investment officer at KraneShares.

KraneShares is an investment firm that specializes in one thing and one thing only: China.

Brendan is an expert in global financial markets with a focus on China. He’s been interviewed by CNBC, Bloomberg, The Wall Street Journal and Investor’s Business Daily.

During our talk, he gave me his favorite way to play China… one that should thrive even if the trade war unexpectedly drags on.

Right now, Brendan says Chinese techs stocks are the best place to be.

“In China, wi-fi and internet are ubiquitous,” he said. “People have their wallets on their phones. Tech is being adopted quicker there than just about anywhere else in the world.”

Plus, these companies get most of their revenues from inside China. So even if the trade war continues, they won’t be affected as much.

One way to gain exposure to Chinese tech stocks is through the KraneShares CSI China Internet ETF (KWEB). It owns a basket of Chinese tech companies.

If the trade war rhetoric dies down—like we predict—the entire Chinese market should rocket higher. And these stocks will go along for the ride.

They’re as close as we can get to winning no matter what happens in geopolitics.