President Biden’s new budget is set to “result in the highest spending in decades,” according to a study by Penn Wharton Budget Model, a nonpartisan group at the University of Pennsylvania’s Wharton School.

The President’s “proposed budget is more than double that of Hillary Clinton” in 2016.

Yet it is a “fraction of the $30 trillion to $50 trillion spending plans” from Senators Bernie Sanders and Elizabeth Warren from the Democratic primary.

But where is this money supposed to come from?

Many believe a “reset” is coming due to the trillions of dollars of new money recently being printed by world governments.

And Jeff Brown is one of those guys.

Only Jeff has 30 years of experience as a high-level tech executive and investment analyst, who has also been asked to consult with prominent U.S. senators on tech-related issues…

And now Jeff feels compelled to warn the American public.

He says the “Great Reset” has already begun.

According to the powerful folks behind the scenes, its purpose is to dismantle the American financial system and replace it with a newer, more “inclusive” system.

It’s a dangerous new “system” where climate change, sustainability, and “fairness” are more important than our constitutional rights…

Where everyone gets treated as “equal” and is guaranteed a basic “living wage”… no matter how hard they work.

Jeff outlines this narrow window of opportunity to reset the world in his latest presentation, called exactly “The Great Reset.” 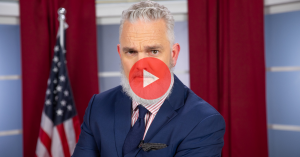